The first 3 images seen from the city wall. Then the camp of the Haradrim with the lying Mumak of the Snake King. Then Grond in march on the city gate. Finally, the orc army viewed from the side from where the riders of Rohan will appear at a later time. 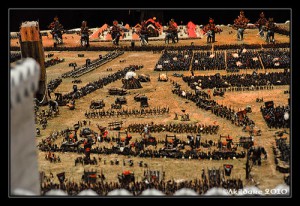 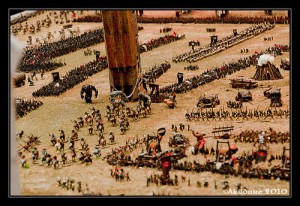 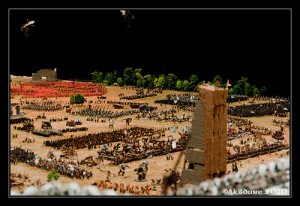 In the background the Dragon Legion of the 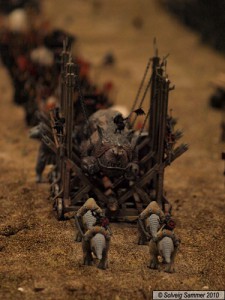 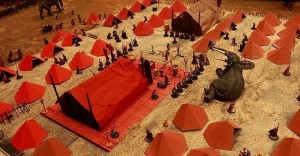 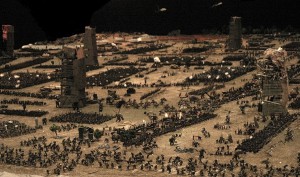 The very first time that we demonstrating a diorama in the dark. The campfire flickered and from above the diorama was illuminated with red lights. In addition 2 siege towers of seven total and 3 Nazgul in the air. 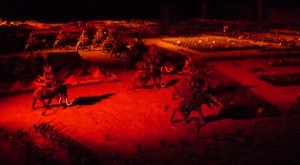 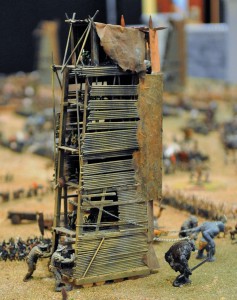 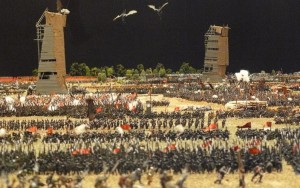 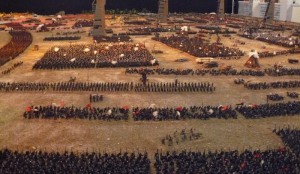 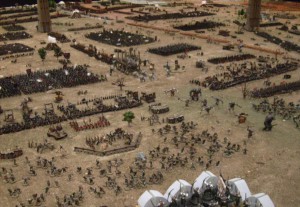 Everything began in 2005 at the  DUZI

(Duisburger Zinnfigurenbörse) where we had already made exhibitions of our historical dioramas with great success for some years.

Here the idea was born to try something different for the DUZI 2007, a kind of birthday surprise the fairs 25th anniversary and for Mick Schröder, the organizer, as an appreciation for his cooperation with and support of our projects.

The work got started under the title „No name project“. We were agreed that this time the topic should be a fantasy theme. The lack of 20mm plastic fantasy miniatures was one problem. And then there was the question: What exactly did we want to show? A siege instead of the standard battles on open ground seemed to be nice.

Impressive … somehow. I think I saw the movie, well one … or two … and twenty times. Not that often really. Well if your looking for minor inspirations. Alright, we have to admit it turned out to be a tiny, tiny tribute to the father of modern fantasy literature … and the impressive adaption of his epic tale to the movies.

And so the recuitment started …

. .. and under the influence of the allseeing eye all were forced to succumb under his will and were mercilessly … orcsified.

Without respite the minions of the dark lord were working to build an army worthy of the great enterprise. All sorts of deformed rabble was called to arms … the overlooked and castaways … and they all were tainted by a very dark, dark colour.

Experts will – under closer scrutiny – detect plastic miniatures from almost all manufacturers from all periods which were forced into the ranks of our orcish masses. Rumours have it that some collectors have been heard screaming with disgust and anger, having found single, yeah even priceless rarities amongst the dark masses. These, however, are only very, very nasty rumours told by slanderous tongues … (however, any body who finds one will be awarded a homemade cookie …)

So what once was creature of light was turned into …

So, what were we about to say? Ah, yes: Evil creatures from all lands and even from beyond time and space assembled under the dark colours. Some even came from beyond the white mountains of neutral Switzerland.

Al long last we couldn’t resist the temptation and include some of these very nice orcs and goblins and trolls and wargs in 28mm from a small producer, which resembled so very much those we had in mind (or was it those we had seen in the movie? We always get so confused). Just a few mind you … and well, perhaps a few more, just some … and then one or two or three … hundred. They are too nice, really … must have them, yes my precious … .

And they can be remodelled too.

our diorama has grown in size and numbers. And grown …

Ah, no no no, we didn’t mean to! No, master, pleeeaaase! We didn’t want to say anything about the date. We knows it was secret … Master? Master!

To grasp the size with people in the background.